As originally published in the University of Louisville News 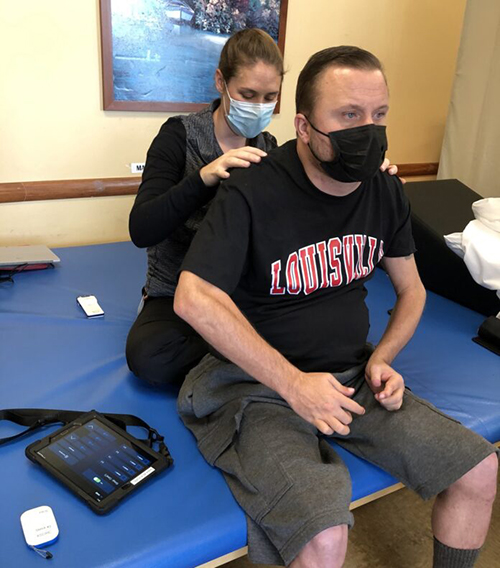 When Keith Smith recently got a new tablet, it wasn’t for watching videos or scanning social media.

Instead, this tablet allows Smith, who has tetraplegia, more independent control of an implanted Medtronic Intellis neurostimulator, allowing him to better take advantage of the stimulator’s benefits for the disabling effects of a spinal cord injury.

“The stimulator has restored my health in a big way. I don’t feel sick all the time anymore. I’m not passing out; I’m not dizzy,” he said. “I am enjoying my life again. It gives me something I can use to fight for my recovery.”

To fully take advantage of the stimulator’s benefits, the stimulator must be adjusted periodically throughout the day to regulate his blood pressure and other functions, each of which requires distinct stimulator settings. Smith, who has limited use of his hands due to a C4-level spinal cord injury, previously had to rely on a caregiver to change the settings due to the small size of the buttons on the standard stimulator controller device.

But now, thanks to the new tablet controller with a larger, touchscreen interface designed with his needs in mind, Smith can adjust settings himself. In addition to a more accessible interface, the updated controller has the capacity to store more setting configurations for immediate use and provides smoother transitions between configurations that allow the person with spinal cord injury to change positions such as from sitting to standing.

Epidural stimulation, an experimental therapy for spinal cord injury recovery, involves implanting an electrode on the lower spinal cord, along with a neurostimulator under the patient’s skin, which delivers mild electrical impulses to the spine. When electrical pulses are delivered in different configurations, research at UofL and other centers has shown they help paralyzed individuals like Smith achieve voluntary movement, blood pressure regulation, the ability to stand, improvements in bowel, bladder and sexual function and other benefits, particularly when combined with activity-based therapy. Some participants even have been able to take steps.

Read the complete article as published in UofL News.